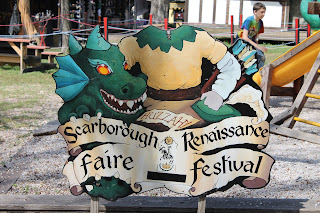 After living in Waxahachie for twenty-seven years, I finally spent a few hours at Scarborough Faire, a huge Renaissance festival that is open in April and May each year.  Tim and I headed out early in the day quickly to find ourselves in a caravan of cars and trucks all crawling toward the Medieval Kingdom just south of town.

If we had known that spectators would be dressing in costume we might have done the same. After admiring the colorful outfits of our local citizens, we contemplated returning next year donned in our own version of King Arthur and Guinevere. 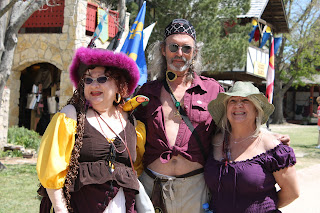 As creative as the locals costumes were, the costumes of the regular renaissance actors were stunning. 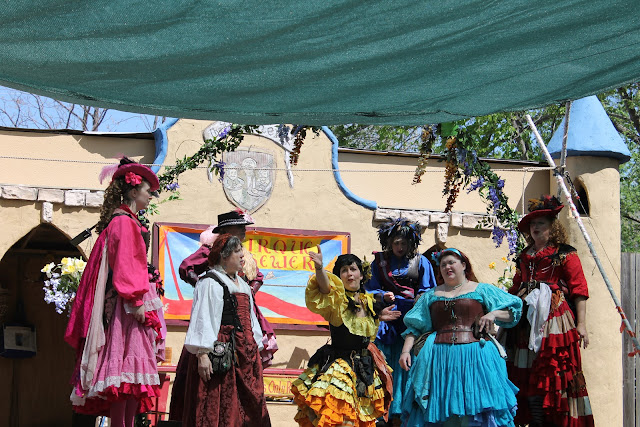 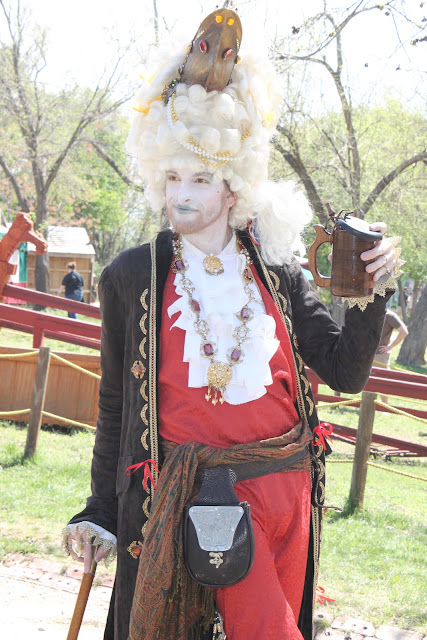 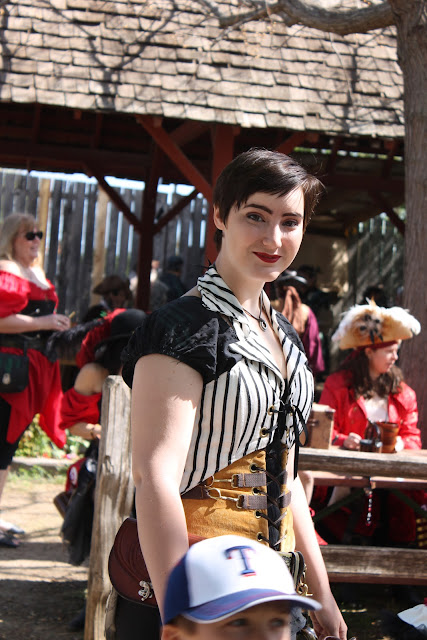 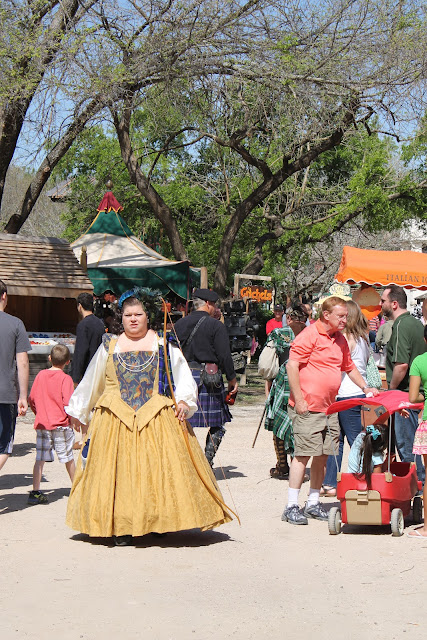 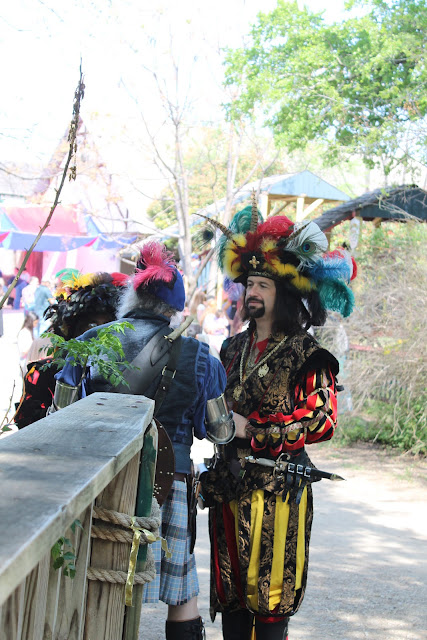 The Scottish assembly was my favorite! Gentlemen and their ladies represented various clans as they gathered together in a regal procession. 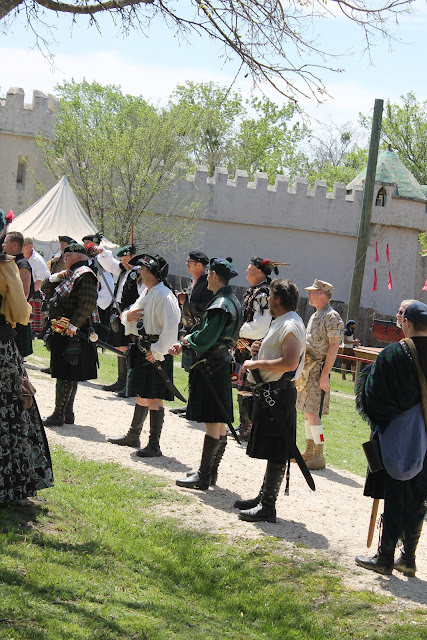 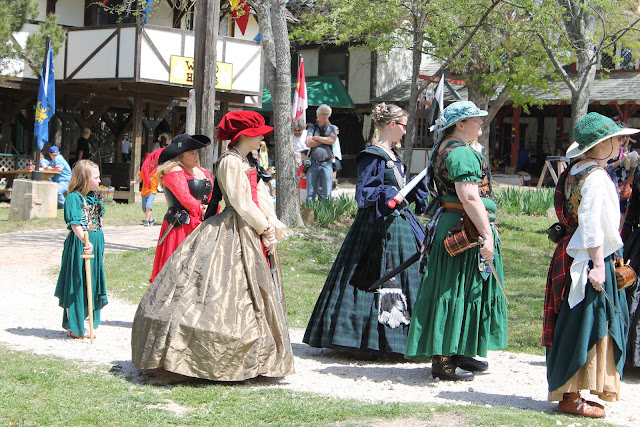 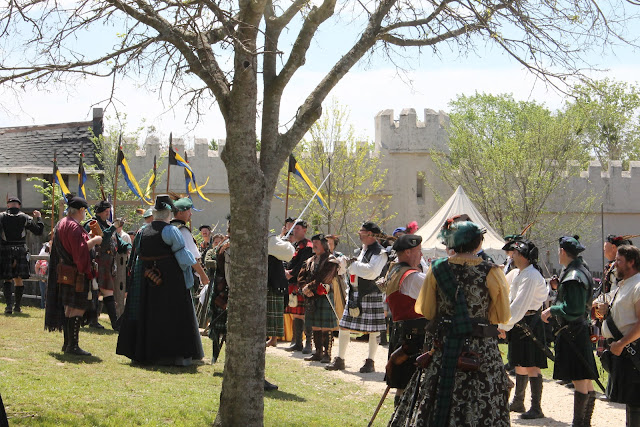 A couple of the characters had clearly gone over to the "dark side". 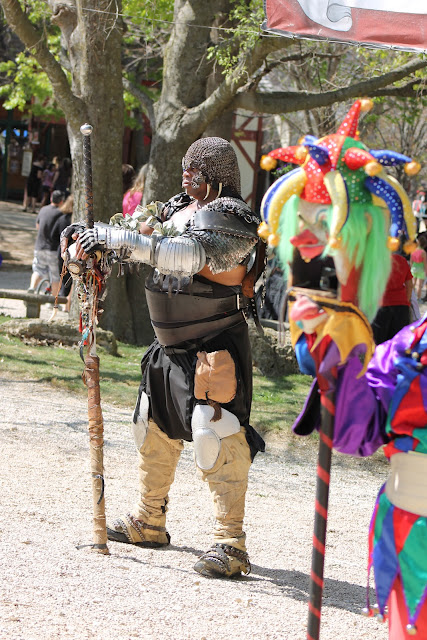 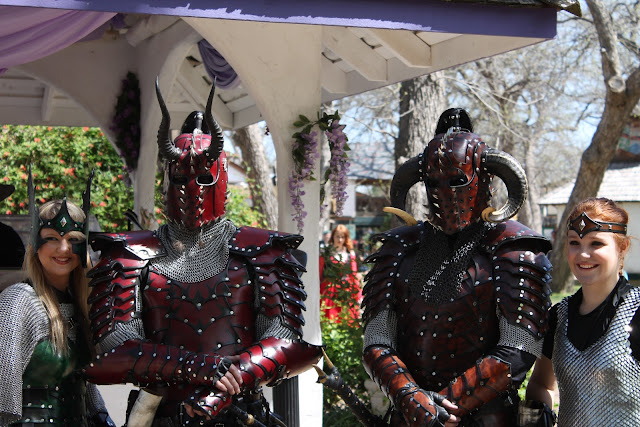 Over the years, during each April and May my family has observed members from this Renaissance troupe out and about in Waxahachie. We knew certain individuals were from the Scarborough Faire group because they wore medieval style clothing as their everyday attire. I assumed this was because they were so passionate about their craft that the reenactment had become a part of their spirit. My thoughts were confirmed when we visited the Renaissance site. I think the actors would reenact the medieval life even if no one came to watch. It seemed to be how they really were...day in and day out.
That being said, I enjoyed my time at the festival immensely and plan to return next year......hopefully, in costume, of course!!

Thank you for commenting, Billie Sue!! The Scottish group was spectacular!! A lot of the characters were carrying around "hardware" befitting their place in Medieval society!! It would be fun to go sometime together!

Woah! I'm really digging the template/theme of this site. It's simple, yet effective.
A lot of times it's hard to get that "perfect balance" between user friendliness and visual appearance. I must say you've
done a amazing job with this. Additionally, the
blog loads very quick for me on Internet explorer. Exceptional Blog!

When I originally commented I clicked the "Notify me when new comments are added" checkbox and now each
time a comment is added I get several e-mails with
the same comment. Is there any way you can remove
people from that service? Bless you!

hello you may want to check out this page..they make one of a kind jewelry often using your babies and angel babies foot/hand print.they also just started an allergy/medical line just in time for the school to start , just one more way to make the school staff aware of your childs allergy or medical issue.they make wonderful Paw prints from any pets you may have.Plus they do fundraising for schools.PLEASE SHARE WITH YOUR FRIENDS https://www.facebook.com/photo.php?fbid=131672397028998&set=a.119946711534900.1073741828.119287218267516&type=1&theater

I love festivals. I always want to go to one in my area but never get there.

I think, you have spend great time.

Hei, It's seems a good photo base blog. And nice to see it. So why you do not upload more photo or content? We are waiting for you. Invit you to visit my blog Cleaning Sevice Tips Blog


Look at the amazing Super bitcoin atm card with free shipping to every country. This will help you to transfer blockchain cryptocurrency balance to real cash fiat money like dollars or local cash with in second and then withdraw it through ATM Machine near to your home.